‘Tiger’, la33 in Naxi, is represented in the pictographic script by the striped head (or indeed full body) of the tiger:

Li Lincan 李霖灿 has the following to say about the character:
“The Naxi divide walking animals into three categories – horned, clawed, and striped. The character for tiger is one of the most frequently appearing characters in the Dongba scriptures, and is often used at the beginning of the scripture. When used to start the story, the character is read ‘ə33 la33 mə33 ʂər55 ɳi33‘, which means ‘in ages past’, or something akin to the English ‘once upon a time’. In scriptures from the Lijiang region, the character is often coloured.”

If the whole sentence were to be transcribed, it would look something like this:

la33‘ is used in lieu of the whole sentence, and is purely phonetic in this case.
Just to prove that I’m not making all this up (who’d know, right?), below you can see the first page of a to55 k’w55 ceremonial scripture, recorded in the third volume of the Annotated translations of Naxi Dongba scriptures 纳西东巴古籍译注> 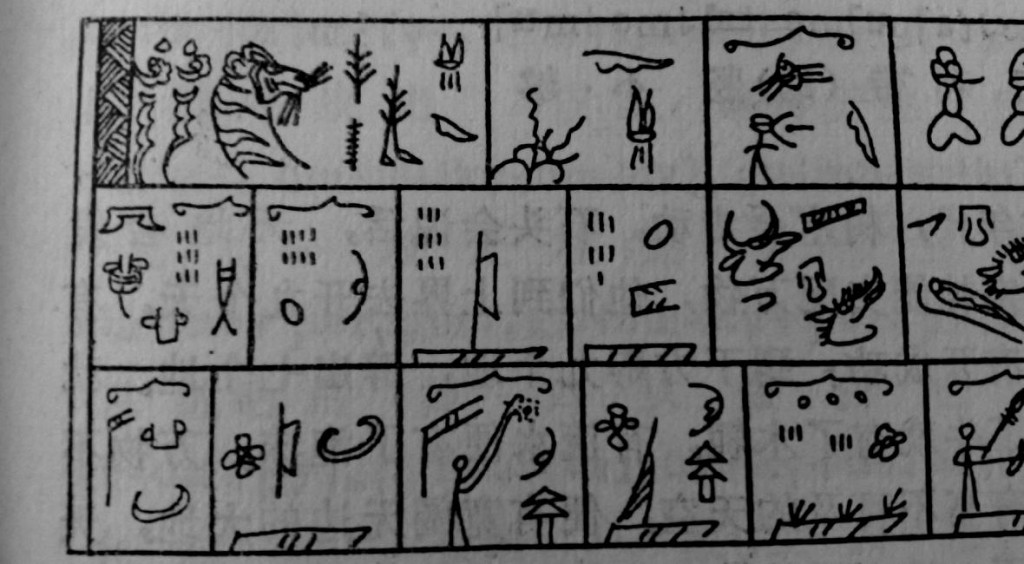 Here you will notice that the very first character of the first panel (the markings to the left of the tiger are used to indicate the start of the scripture and do not constitute writing) is la33, tiger, which is read ‘ə33 la33 mə33 ʂər55 ɳi33‘, and translated as 远古的时候, “in ancient times”. The first panel has six distinct characters, but when read, includes ten syllables.