Any new release concerning Naxiology in the English language publishing world is cause for celebration. Sons of Heaven, Brothers of Nature: The Naxi of Southwest China by independent researcher Pedro Ceinos Arcones is essentially a prospectus of the Naxi and their culture, their funerary customs, their religion, music and dance. There is no other comparable, one-stop English language book that contains all this information, and for this I commend the author. 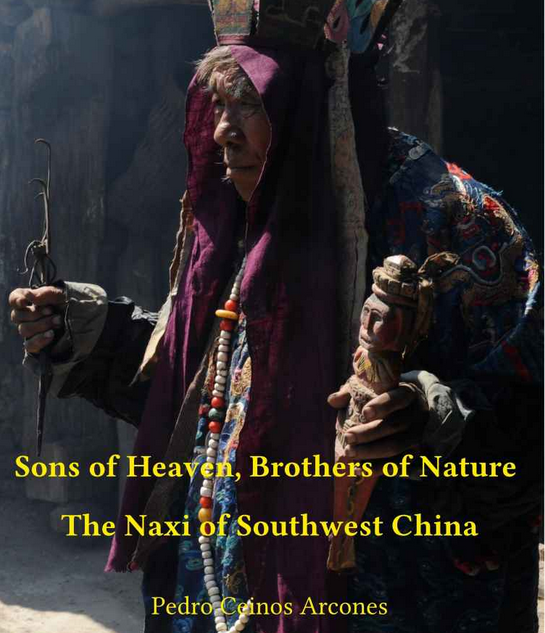 It is a summary of what has been written about the Naxi, and looking at the bibliography we see that Mr Ceinos really has done his homework – as far as I can tell, the author has read every available work that has been printed in English about the Naxi, from Bacot, to Rock and McKhann, and much of the Chinese literature as well.

The book serves then as a great overview of this fascinating people: open the chapter on Naxi religion and you are treated with a systematic breakdown of the Dongba pantheon, with dense quotations from secondary sources. This over-reliance on secondary sources does not serve to hamstring the book, but instead to elevate it above the typical “I saw this…” style of travelogue that so plagues English-language China publishing.

Pictographs – although without Naxi pronunciations – are scattered throughout the book in relevant chapters. Unfortunately there are no Chinese characters in the text, and the romanisations for proper Naxi names jumps from Hanyu Pinyin back to Naxi romanisation, seemingly depending on the source that the author has used. Orthographic issues such as these have however plagued bigger publishers.

The real enthusiasm that the author has for his subject really does come through, and although it’s difficult to recommend it as a very well-written book (English is, after all, not the native language of the author), this is just the kind of introductory text that would suit an enthusiast who doesn’t have the time to trawl through old issues of Monumenta Serica in search of Rock’s articles.

One minor nitpick. Ceinos, if only in passing, perpetuates what I call the “mnemonic myth” that the Dongba script was only used in the scriptures as a mnemonic aid, saying: “As this script was not used for administration or literature, but only for ritual and religious activities…”

This has been the commonly-held view for decades, but as Yu Suisheng has shown, it is simply not true.

But no matter. This is a real labour of love, and for only six dollars for an ebook version, it comes very highly recommended.

*The author kindly provided me with a copy to review. Note that I don’t make any commission on sales via Amazon!