The following is a diagram used to select an auspicious date (Chinese zeri 择日) for holding a wedding ceremony – and to avoid having evil spirits bedevil the bride or groom. The picture and a gloss can be found in Wang Shiying 王世英, Naxi Dongba Zhanbu Dianji Yanjiu 纳西东巴占卜典籍研究. 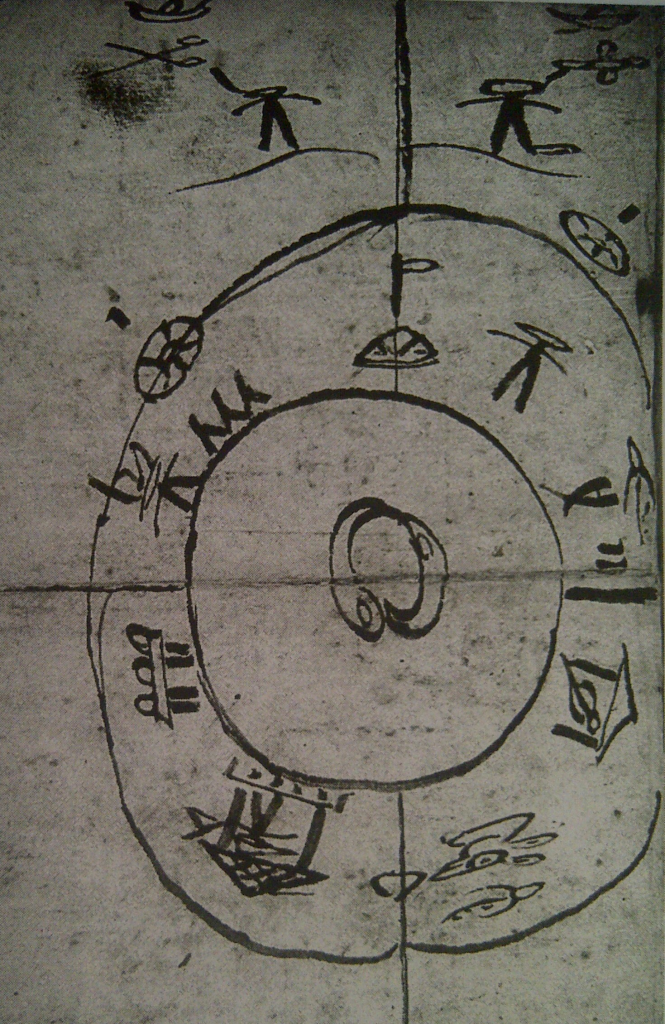 The Naxi believe that spirits exist everywhere around us, and that these spirits must be placated when disturbed – large events such as weddings tend to disturb the harmony between the human and spirit world.

The diagram shows who, or what, will become disturbed by evil spirits depending on which day of the lunar month the wedding is held.

he3 me33 dɯ21), a ‘large month’, the diagram is navigated clockwise. This is depicted by the person moving to the right in the top right corner of the chart. During a lunar month of 29 days, (

he33 me33 ʨi55), a ‘small month’, the chart is navigated counter-clockwise (the person moving to the left in the top left corner). Direction of navigation is depicted by the character

ʐɪ33 ʥi33, literally ‘to set off on a journey’, with the journeyer facing either left (counter-clockwise) or right (clockwise) as required.

We can see then that there are no ‘safe’ days – on every day of the month that the wedding is held, come rain or shine, spirits will end up haunting someone. I think you have to feel sorry for the cook’s assistant, who seems to be the safest bet for a haunting – he’s not a family member, nor is he presumably as important as the marital house itself. Even so, there are ceremonies that can be performed to appease the spirits that are disturbed during a wedding, so all would not have been lost for the chap who kept the stove burning.