The Russian traveller Peter Goullart spent the better part of the 1940s living in Lijiang, and was a contemporary of the eccentric yet gifted Austrian explorer-ethnographer, Joseph Rock.

He wrote a book about his time in Lijiang, Forgotten Kingdom, which I recommend everybody interested in the region pick up and read. As the author doesn’t make much mention of the Naxi script one can only assume he wasn’t particularly familiar with it, but there is a particular passage that leads one to believe that he was at least proficient at a conversational level in spoken Naxi. The author is making the long and arduous caravan journey from Dali to Lijiang, and is waylaid by bandits upon nearing the Lijiang plain. His knowledge of the Naxi language helps him escape unscathed. I’ve always felt that this is the kind of dialogue they should teach in schools – it’s really simple, but the context is fascinating. Something like “Lesson 1: on extricating oneself from highway robbery in the native parlance’.

Plodding hour after hour in the oppressive silence and utter loneliness, we stopped talking.
At last we came to a turn, after which the dreaded temple should have been visible. A band of ten men, poorly clad but each carrying an old gun, appeared as if from nowhere. We did not stop and they fell in with us. At last one of them spoke.

‘Zeh gkv bbeu? (Where are you going?)’ he asked me in Nakhi.
‘Ggubbv bleu (Going to Likiang),’ I answered brightly. He pondered.
‘Nakhi kou chi kv (You understand Nakhi),’ he smiled.

A flood of conversation followed with my boy, the guards keeping discreetly silent. Hozuchi explained who I was, where I lived and where we were travelling from. I guessed at once who the strangers were, but kept my own counsel. I was not afraid of being killed, but I hated the idea of appearing in Likiang in only my underwear.

Following Goullart’s generous transcription of the dialogue, I have reconstructed this exchange in both the Naxi dongba script and IPA – to the best of my ability (note that I am by no means fluent in spoken Naxi so if anyone has any comments or corrections, then please do speak up!). 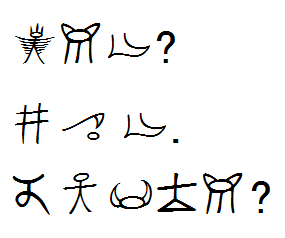 1st line: Where are you going?

Winged demon, garlic = loan for ‘where’ / to go