I have been reading a lot of J. F. Rock’s old monographs about Naxi rituals, and last week came across the following passage about a particular Naxi character:

bä means ‘to do’, ‘to perform’ and is written with the symbol representing a hoe which is raised thus:

and shows the soil clods being thrown up; this would indicate that the character had been invented after they [the Naxi] had become a sedentary people and had practised agriculture.

Aside from the etymological titbit, I thought immediately of Fenollosa and Pound, and their assertion that Chinese is an inherently more poetic language because of its writing system.

…the great number of these [Chinese] ideographic roots carry in them a verbal idea of action … a large number of the primitive Chinese characters … are shorthand pictures of actions or processes.

The Chinese Written Character as a Medium for Poetry

‘To do’, of course, is the archetypal action verb.

The Naxi ‘be33′ is a very versatile character, and a strong, active verb, meaning to make, to serve as, etc.

What could be more denoting of action than the sharp hoe swiftly descending, rending the earth, causing clods of soil to fly up every which way?

But the be33 used today is subtly different than that recorded by Rock. Gone are the dots, denoting pieces of earth. In modern Dongba IPA the ‘clods of earth’ have been simplified into one elliptical shape:

The character has become an abstraction; no longer is it a hoe tilling the soil, it is now just a tool striking an object.

See this extract from Popular Dongba Script (the ‘be33′ is the last character):

The English translation for this line (from a poem) would be: “The red tigers serve as our steeds”, with ‘be33′ meaning ‘to serve as’.

But when we consult the older scriptures (many of which were collected and preserved by Rock) we can see that the character has the form that Rock transcribes (highlighted in red).

If we go to Rock’s dictionary, we find that be does indeed have a variant, although the object beneath the farming tool is rectangular, not elliptical:

In fact, whilst we are looking at Rock’s dictionary, we see how be33 can be combined with other characters to form words and phrases: 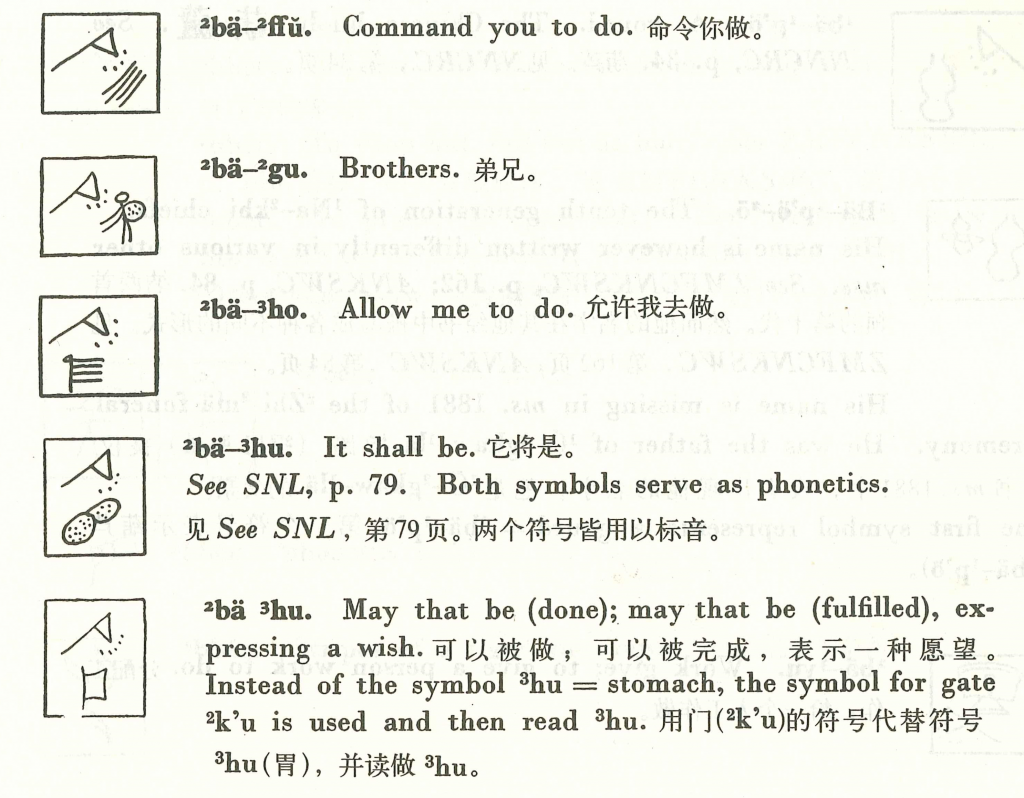 Both these images are scanned from the Chinese edition of Rock (as you can tell by the Chinese translation) which does at least preserve his original English.

And whilst we are on the topic of ‘be33′, it would be remiss of me not to mention its most common usage, at least in spoken Naxi – saying ‘thank you‘. In Naxi, ‘thank you‘ is:

pronunciation:  ʥə21 be33 se21 me55  (all the above characters are used phonetically)

So, don’t say I never tell you anything useful!

One thought on “Hoe down: a Naxi action verb”