I don’t think I will be inviting much opprobrium to suggest that food is not one of Naxi culture’s greatest achievements. Most esculents in Lijiang tend to be either too spicy or too salty, which is why the influx of western cuisine – and dare I say it, junk food – is not really the bane many purists imagine it to be. KFC may not be an Epicurean’s delight, but I dare say its brand of fried chicken has staved off the starvation of many a tourist over their brief stay in Lijiang. KFC does a roaring trade in the city (the last time I checked, the two KFCs were within a stone’s throw of one another around the square that marks the boundary between old town and new), and just in case you ever wanted to know, the Naxi for KFC (or more accurately, the Naxi transliteration of the mandarin 肯德基 kěn dé jī ), is this: 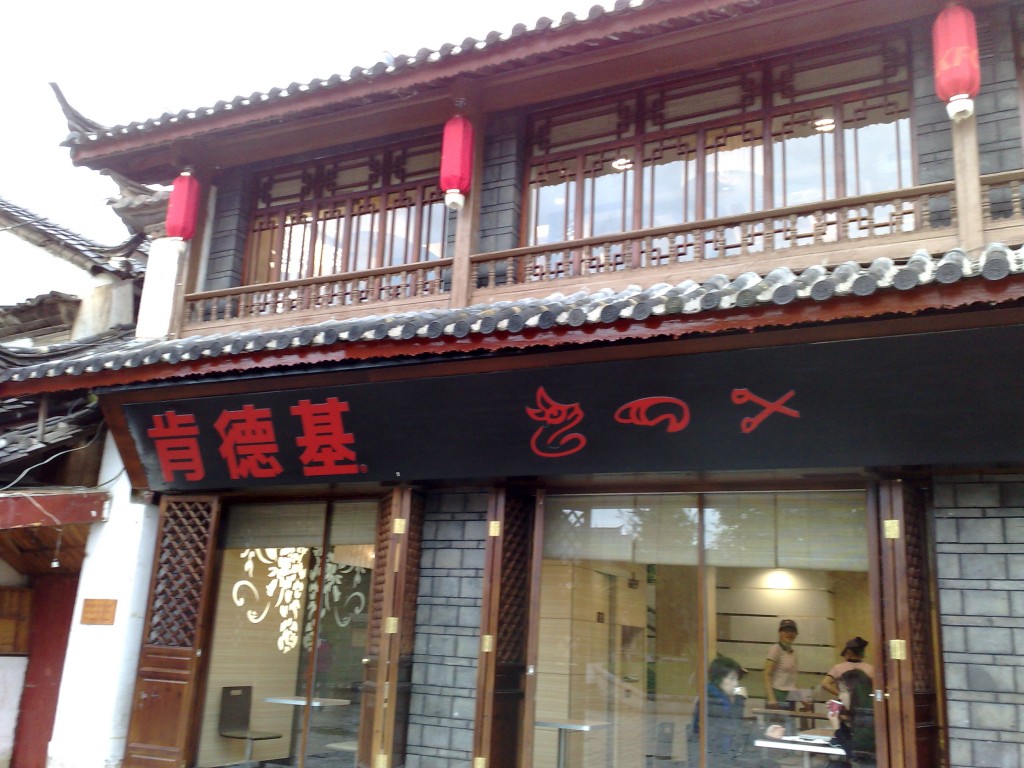 (Notice the English lettering, KFC, has actually been omitted here in favour of the Naxi.)

I trawled through all my dictionaries and couldn’t find the middle character. The closest I got in visual resemblance was dʑi33, apparently a kind of Chinese yeast (notice the indentation in the middle character on the sign). But its pronunciation is not really all that close to the Chinese ‘de’. This could be a mistake on the part of the translator, or perhaps the graphics company responsible for the printing. Anyway, I think the sound ‘tɯ’ is much closer, represented by the character for ‘to rise’: tɯ33

I’m a big fan of these Naxi signs. Sure, the transliterations are haphazard at best, but at least some effort has gone into it, and it gives the place a bit of much-needed character.