From Richard Cook’s page on Naxi:

“Naxi is a Tibeto-Burman (TB) language, related to the Moso (a.k.a. W. Naxi) and Loloish (Yi) languages. Matisoff places Naxi in the Burmo-Naxi-Lolo group of TB within Sino-Tibetan. It is named after the Naxi ethnic minority group of China.” The Naxi are located primarily in the Lijiang municipality in China’s Southwestern Yunnan province.

What follows is either translated or borrowed from Naxi scholars Fang Guoyu 方国瑜 and Li Jingsheng 李静生, with a bit of my own stuff added in.

Naxi pictographs are pictures that have developed to become writing. In the native Naxi language, they are known as

sər33 tɕə21 lʏ33 tɕə21. Tɕə21 means ‘record’, sər33 means ‘wood’, and lʏ33 means ‘stone’. Fang take the word to mean ‘draw a tree for a tree and draw a stone for a stone’, whereas Rock interprets it as ‘records made on wood and stone’. It is a writing system created by pictographic representation.

Yu Qingyuan 余庆远 referred to this form of writing in his A record of things seen and heard in Weixi 《维西闻见录》 (1770), wherein he writes: “The Mosuo have a form of writing that is solely pictographic. For a person, they draw a person, for an object, they draw the object, and that is their script.” [Mosuo is the old Han-given name for the Naxi, 'Naxi' is their name in their own language].

There is another Naxi script, phonetic in nature, that is known as

gə33 ba21, the Geba script. Fang Guoyu notes that ‘ba21‘ means ‘call out’, and ‘ge33‘ means ‘onset’, and as a whole the word can be taken to mean ‘pronounce the word by looking at characters’. The script is composed of characters formed from simple strokes, with set pronunciations. Whilst J.F. Rock believed the Geba scrip to predate the pictographic, the consensus of Chinese research is that the pictographic script is earlier. Very few scriptures are written in Geba, and it’s multitiude of geographical variants mean it is of very little practical use.

There is no clear record of when Naxi pictographs were created, and no single agreed explanation of their history. As such we can only speculate as to their age. Dongba scriptures record that the Han, Tibetan and Naxi scripts were created concurrently by three different sages. This is of course legend for which there is no evidence. There is a Naxi character depicting these three script sages: 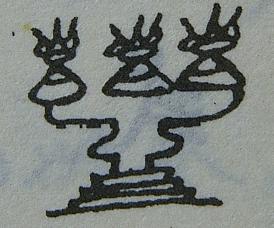 The three script sages of Naxi, Chinese and Tibetan

The pictographs originated in the distant past, from the use of pictures to record events; and by the time they began acting as linguistic markers, using one image to represent one thing, with one meaning and a set pronunciation, they became writing. This kind of writing can only develop under certain social conditions – likely after the formation of a ‘class society’.