Much has been made of the ‘primitive’ nature of the Naxi script, whereby in written scriptures certain words and in some cases whole sentences are left out, with the text simply serving as a mnemonic aid for the priest to recite the scripture.

(This is certainly true of many texts, but modern documents with each word represented in the text, such as diary entries and letters, do exist. It cannot be stressed enough that the Naxi script is a functional writing system.)

Let me share with you one example of the script as a primarily mnemonic device.

These 13 characters, when read out by a Dongba priest, represent a total 27 sentences, containing 183 phonemes. Each character, on average, represents two whole sentences. The text here uses characters as a mnemonic device, stimulating the memory of the reader. This is the traditional understanding of how the Naxi script works.

Here I provide a transliteration and translation of the first four characters of this extract:

Simply looking at the four characters and reading them one by one, we get:

When read by a Dongba, however, the four characters would represent the following nine sentences:

Translation: Beneath the great fir tree, the little golden mountain goat was bleating

Translation: “Why do you bleat so?”

Translation: “I bleat not out of leisure,

Translation: When I was but a kid, I was fed green grass.

Translation: Now I am older, there is no grass.

Translation: where have you gone, no longer to be found?

Translation: It is lost and must once again be found

Translation: And this is why I bleat so.

The remaining eight characters of the extract are very similar in structure to the first part; the dog is barking because it has no milk to drink, and the cock is crowing out because it has no rice to eat. This is an oral text at heart, and the repetition is indicative of its oral roots.

This is part of the Co Ssei Lee Ee story, which tells how the male and female ancestors of the Naxi tribe came together to beget the Naxi people.

The titular ‘Chare Li’en’ is the Hanyu pinyin romanisation of the Naxi Co Ssei Lee Ee, the name of the male ancestor of the Naxi people, and a legendary Naxi hero.

Here is my translation of the relevant part of the poem:

Into the dark forest of fir he strode

Lee Ee took him up in comforting embrace

And so the goat bleated thus unto him:

“In days afore you fed me with grass so green

But now there is aught but mud and stone

I hunger, sire, where can such grass again be seen?” 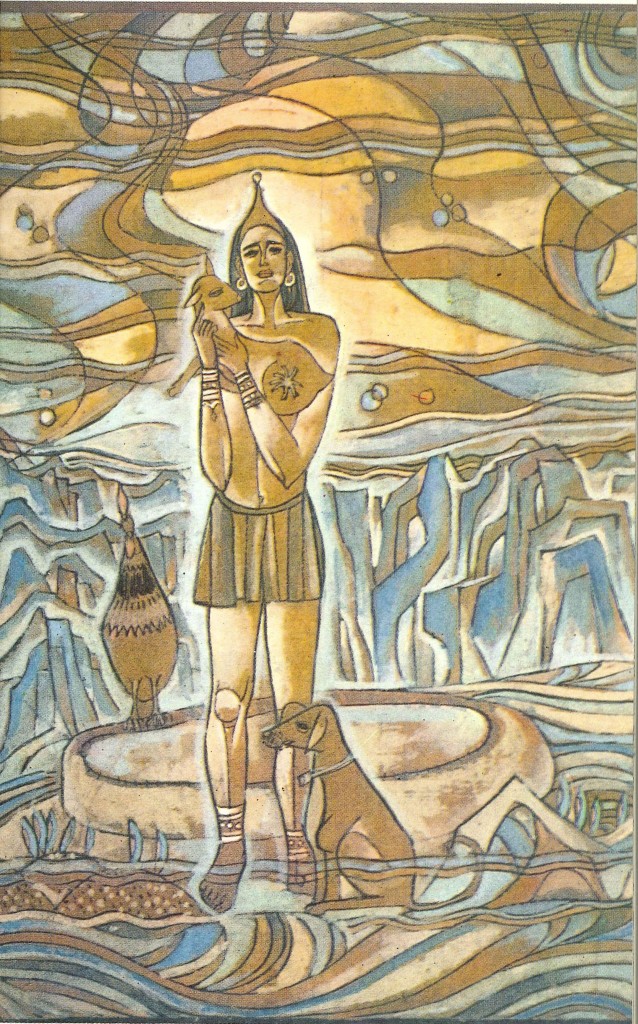 Texts such as these make use of phono-semantic characters, plenty of loan characters, and the odd Geba syllabic character. The majority of modern and secular uses of the script are written in this way, although the vast majority of scriptures are not.

This extract from a Dongba scripture is divided into two panels.

sɪ33: name of a ghost, ‘see’, used here as the first part of the place name, “see lo”; the place is on the banks of the Wuliang river, in Sichuan’s Muli county. In Chinese the place is known as 鼠罗

ŋy33: to tremble, used here as a loan for “oneself”

ŋy33: to tremble, used here as a loan for “oneself”

The sentence shoud then read:

The sentence should read:

Having chopped a yellow wooden basin, and living by the upper reaches of the Wuliang River, he went again to pan for gold.