The following article will be published in the third issue of Dongba Culture 《东巴文化》, the newsletter of the Lijiang Museum; many thanks to the Museum and Zhao Xiuyun, the translator. Unfortunately, I don’t have a copy of any of the original scriptures mentioned in the article.

A note on some of the terminology
The article was originally written in Chinese, and did not contain any Naxi phonetics or Dongba script. Proper Naxi nouns are therefore transcribed in pinyin. Using my dictionaries I have traced the original Naxi for some of the terms:

– the family or life god, analogous to the Tibetan ‘srog lha’, God of Life. The pictograph depicts a sacrificial bowl.

– the name of the ritual (Suzhu) and also the sacrificial ‘basket’ used therein (see picture).

– the sacred stone. ‘hæ21′ meaning gold, in the top right corner, is a phonetic element.

Worship of the family God – the wedding ritual of “Suzhu” 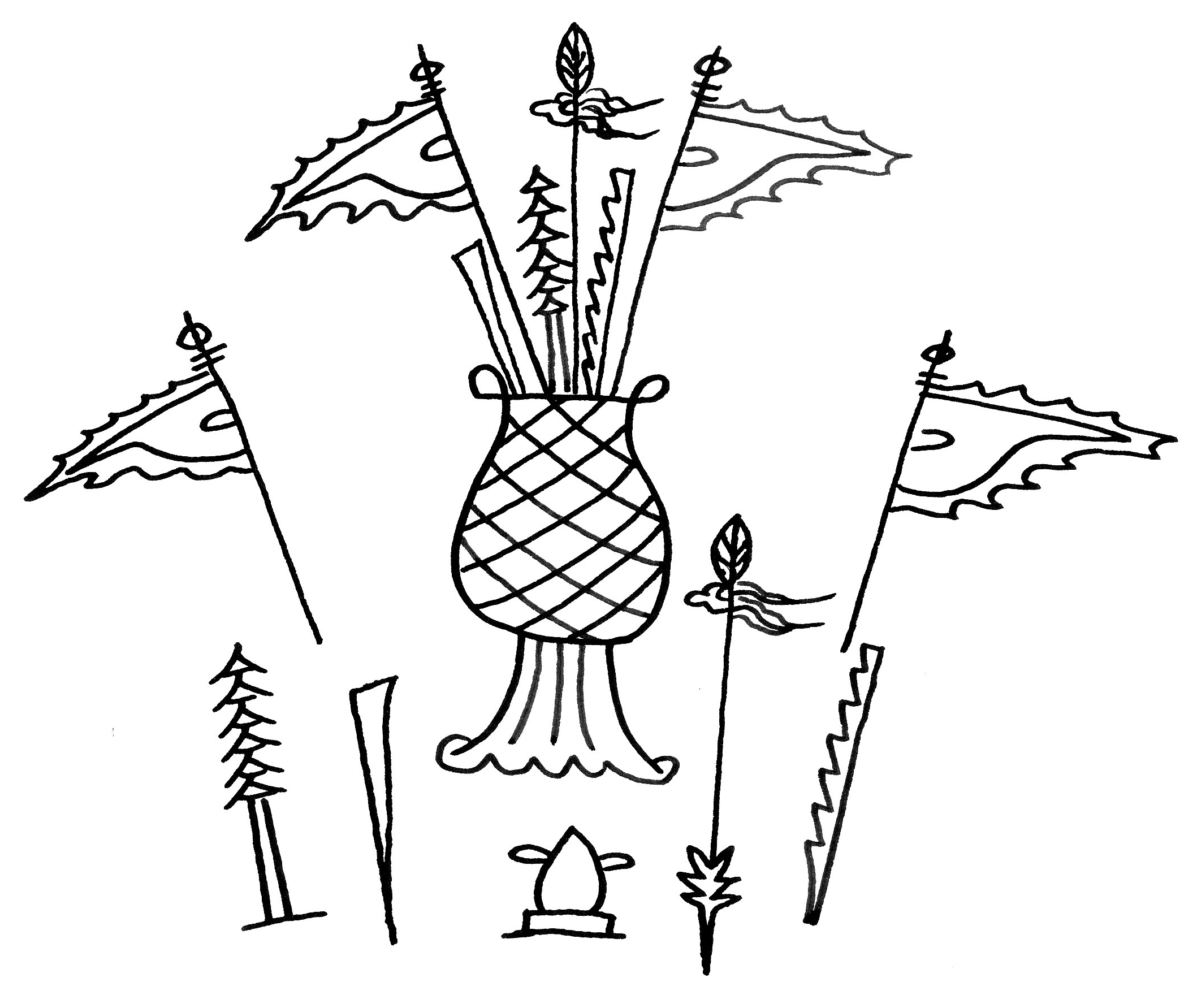 In the basket that represents the place where the God Su resides, there are Su arrows, a pagoda made from green cypress, a pine tree ladder [ɕy55 le33 dʑi21], a yellow oak sacred Su stick, and a sacred stone. Among them, the arrow represents the three generations of the family, including the father, the son and the grandchildren; the five color silk strings or cloth stripes represent the main elements of life, namely wood, fire, earth, metal and water. The pagoda represents the place where Su rests. The pine ladder has nine steps and represents the necessary path that the God Su must pass to bless the family with luck and prosperity.

“The Origin of the Sacred Arrow” is narrated as follows:

“When there is change between the father of rattan bamboo and the mother of rank grass bamboo, blackish bamboo appears. The white sickle comes to cut the blackish bamboo and makes the God Su arrow by using the three joints of the bamboo. The metal arrowhead is then divided into three joints. These represent the father, son and the grandchildren, three generations of the family, and the five color silk strings or cloth stripes on the three joints of the metal arrowhead represent the main elements of life, including wood, fire, earth, metal and water. Later, the arrow should be placed into the Su basket…”

The following is recorded in the “Origin of Sacred Stone”: